What to feed a vegetarian at a BBQ (part II)

One of the most popular articles on my site last year was addressing a question I get asked a lot: what to feed vegetarians at a barbecue

I remember years ago taking a block of halloumi to a party so I knew there would be something on the menu for me, and was slightly surprised when I was handed it back, sliced and raw, in a bun.

We’ve come a long way since then, and though halloumi has it’s place,  there are a lot of other tempting options for those of us who choose a plant-centred diet. So many that I am doing a part two to follow last year’s article.

This is a perfect recipe for a crowd and works brilliantly on the barbecue rather than the broiler if you like. One thing to ensure here is that your eggplants are buttery and soft; raw eggplant has to be one of the worst things to eat. Eggplant is a pretty resilient vegetable, so be brave when you cook it, and give it long enough to make sure it’s cooked through. Try to get your hands on the longer, thin eggplants, as short fat ones will take much longer to cook through. 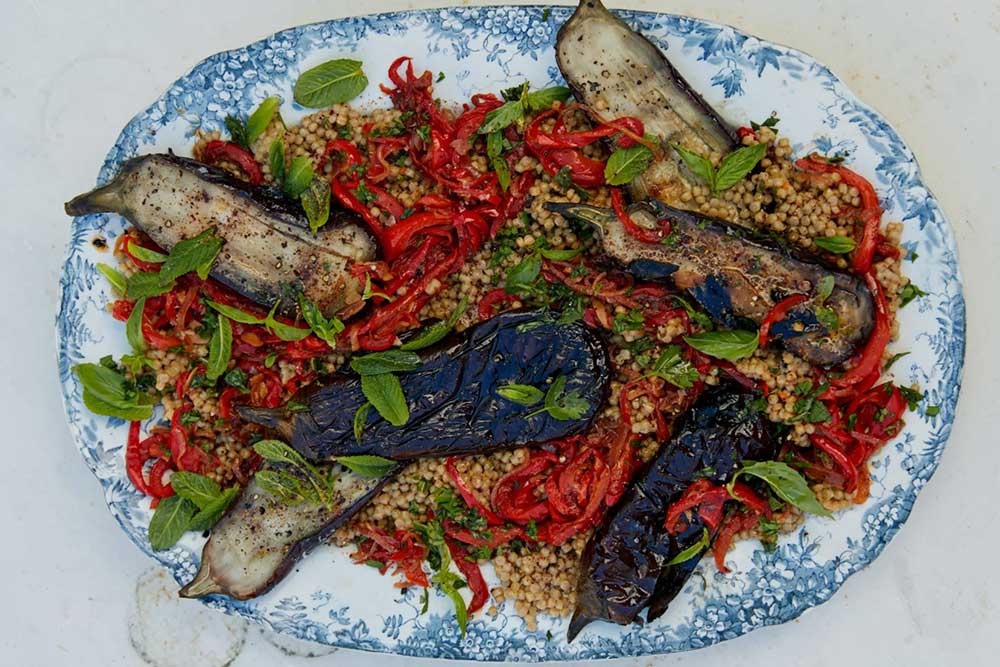 I love these flatbreads, which can either be cooked in a pan or on the BBQ.

Vegetables and other things that work on the barbecue:

All of these can be eaten on their own or mixed into a warm salad with crumbled cheese and chickpeas or beans to make a meal.

Aubergine: grill them whole until soft and blackened all over, then cut open and season or mash into baba ganoush; or halve and grill them cut-side down, turning every so often and basting them with white miso throughout the grilling.

Avocado: peel and stone halved avocados, season and grill until well charred on the outside. Dress with soft herbs, lime and chilli.

Beetroot: wrap in foil with some woody herbs and whole garlic cloves and bake in the embers as you would a potato for 30–40 minutes. Or cut into thin slices and grill until soft and charred, turning every couple of minutes. Dress with orange juice and chopped thyme or marjoram

Cabbage: grill summer cabbages in wedges with the root still attached so they stay together and char until soft and crisp on the outside. Dress with a mustard, honey and lemon dressing.

Chicory and radicchio: cut in half down the middle and grill until softened and well charred. Dress with orange zest, wholegrain mustard, vinegar and good oil. Great with grilled pear too.

Courgette: cut into thin slices or peel into thin strips and grill until soft and charred, then dress in lemon, mint and herbs. Good with milky soft cheese.

Potato: wrap in foil with some whole garlic cloves and lemon and bake in the embers for 40 minutes to 1 hour or slice and grill until soft and charred, turning all the time. Serve with chopped soft herbs, capers, oil and lemon zest.

Sweet potato: cut into long 1cm slices, cook until soft throughout and well charred, turning all the time. Serve with chopped coriander, yoghurt, chilli and lots of lime zest and juice.

Tofu: press to get rid of any excess liquid, then slice thickly and marinate in citrus zest and harissa, or miso and soy. Grill, turning and basting as you go, until crisp. Or marinate in lemon, thyme and honey and grill until crisp, then eat crumbled into flatbreads or over a salad or barbecued veg.

Peach: cut in half and remove the stone, then grill until charred on both sides. Serve with tomatoes, mozzarella and torn basil or mint.

Pineapple: peel, cut into wedges, then toss with honey or brown sugar and barbecue until charred on the outside and soft inside. Serve with ice cream or yoghurt.

A childhood spent in America meant a lot of Caesar salads: the clean crunch of Cos lettuce, the serious hit of flavour from the garlic-kissed dressing, the burnished golden brown of a crouton. 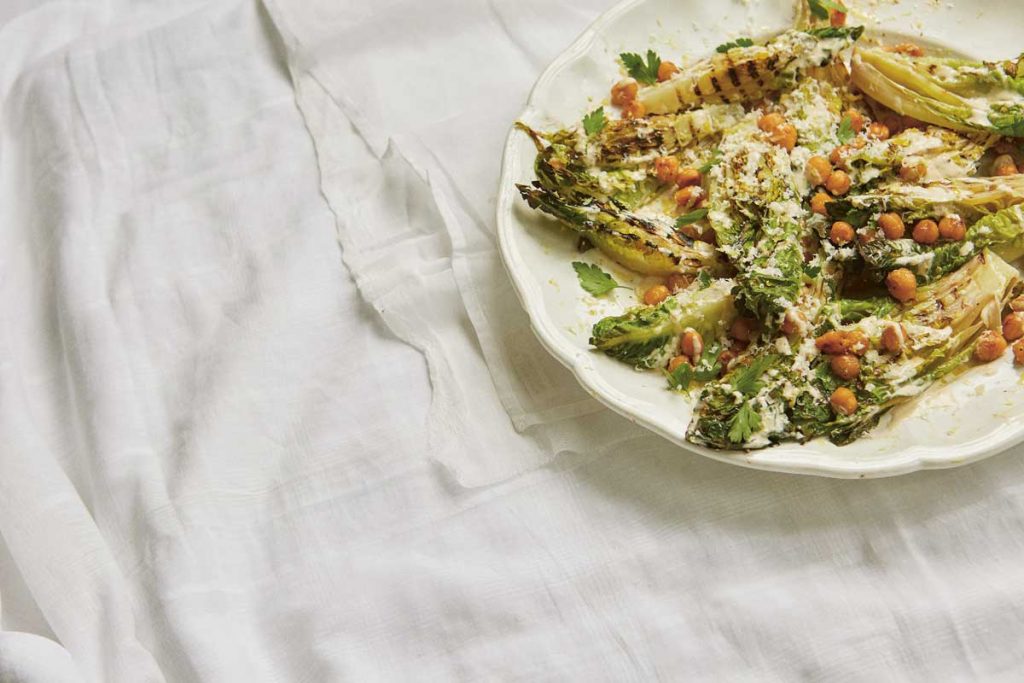 Charred courgettes with mozzarella and loveage

The lovage oil is the crowning glory and simpler than you might think, though a good pesto would work too. Any leftover oil can be kept in a jar in the fridge for a few weeks. A mixture of parsley and celery leaves will also work. 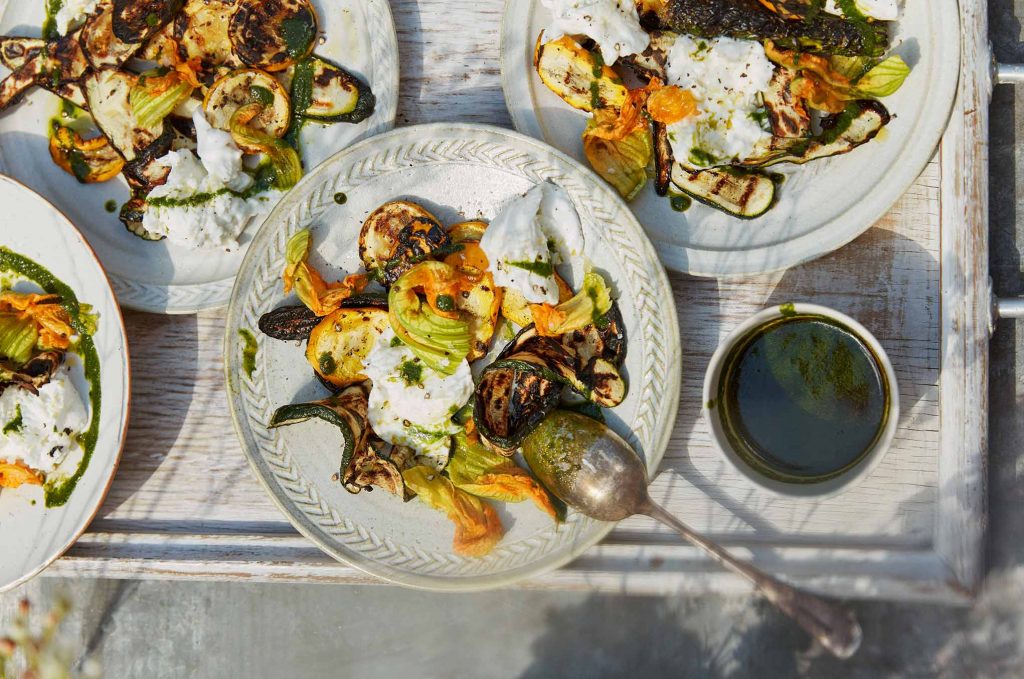 What about jackfruit? It’s readily available in cans from Asian specialty shops and even can be found in Trader Joe’s these days. Seasoned and grilled? My family is dubious of tofu but my 9 yr old announced he loves how meaty jackfruit is. I would substitute it for pork.